People who have psoriasis or psoriatic arthritis are more likely to develop nail changes. About 50% of people with psoriasis and about 80% of patients with psoriatic arthritis to be precise. Medical specialist are still searching for the reason that some patients do get nail changes and other don’t. In rare cases the nails are even known to be the only part of the body that show signs of psoriasis.

Nail psoriasis can cause several different symptoms. These symptoms can often come across as a fungal nail but are actually psoriasis nails.

Pitting. The nail plate is the hard surface made of keratin cells that forms the top of your nails. Nail psoriasis causes the nail plate to lose those cells which results in small pits forming our the nails. The amount of pits varies per person. Some people may have only one pit on the nail while others have many. The shape of the pits can both be shallow or deep.

Nail bed separation. Sometimes the nail can separate from the nail bed which is the skin under the nail. The official term for this separation is Onycholysis. In case of psoriasis nails, the first visible signs are mostly a white or yellow patch at the tip of the nail. The color will eventually go all the way down to the cuticle. When this happens the bacteria could get into the space under the nail and this might cause a fungal nail infection.

Changes in nail shape or thickness. Next to the above symptoms, there might be other changes in the texture of the nails. Psoriasis can cause lines to form across the nails. Weakness of the structures that support the nails can cause the nails to become brittle or crumble. Nails can also become thicker due to a possible fungal infection.

Discoloured nails. The color of the nail can change. In case of psoriasis nails this looks like a drop of oil under the nail plate. Mainly yellow-red coloured called oil-drop spot. 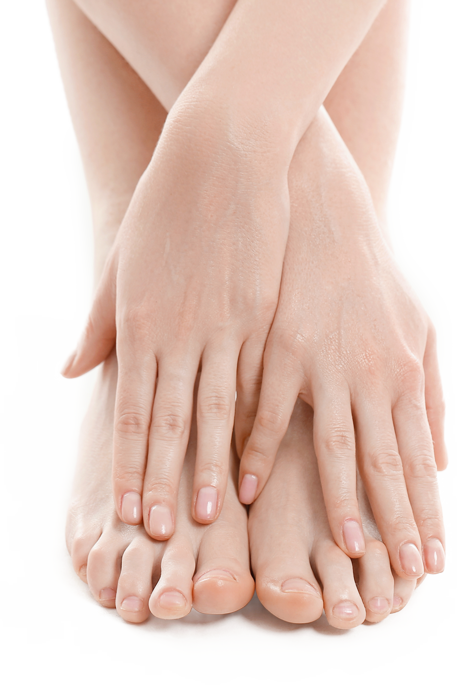 Although the two conditions of nail psoriasis and fungal nails may look very similar, there are differences between them.

Nail Fungus is fairly common and usually starts with a discoloration in the nail.